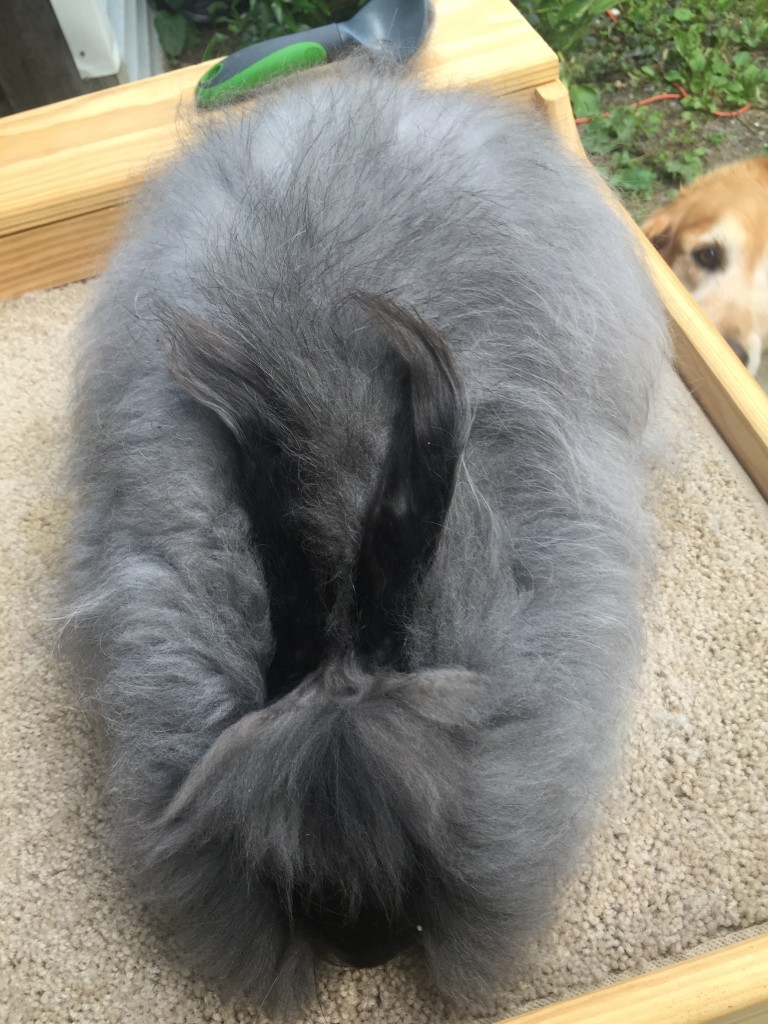 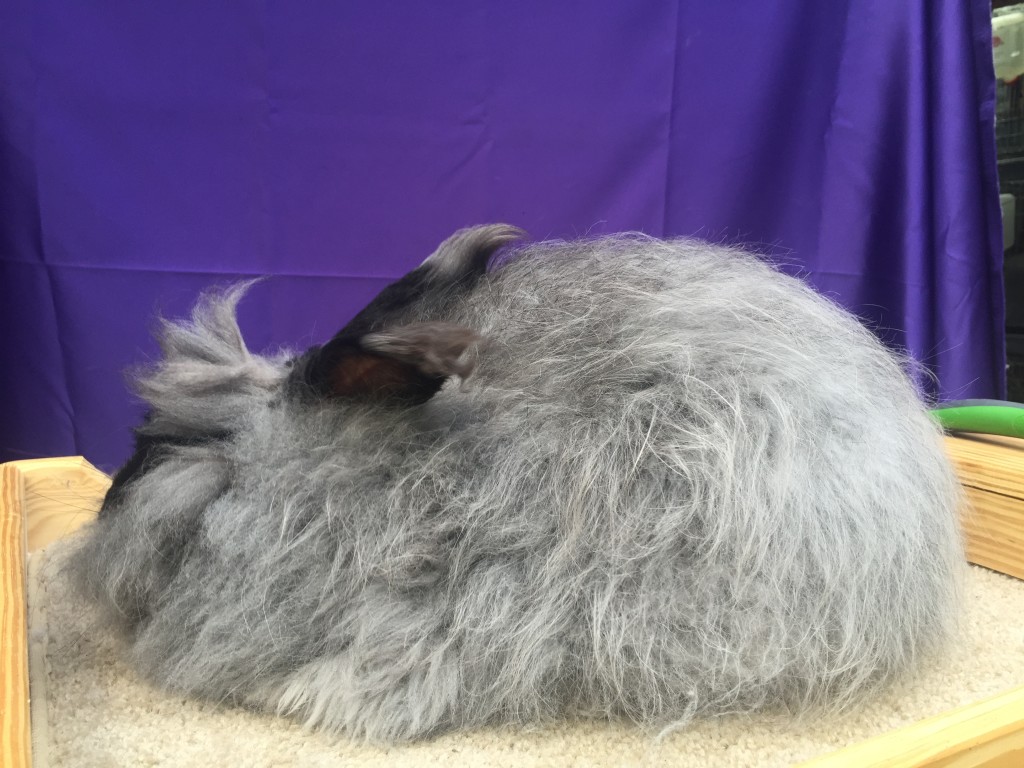 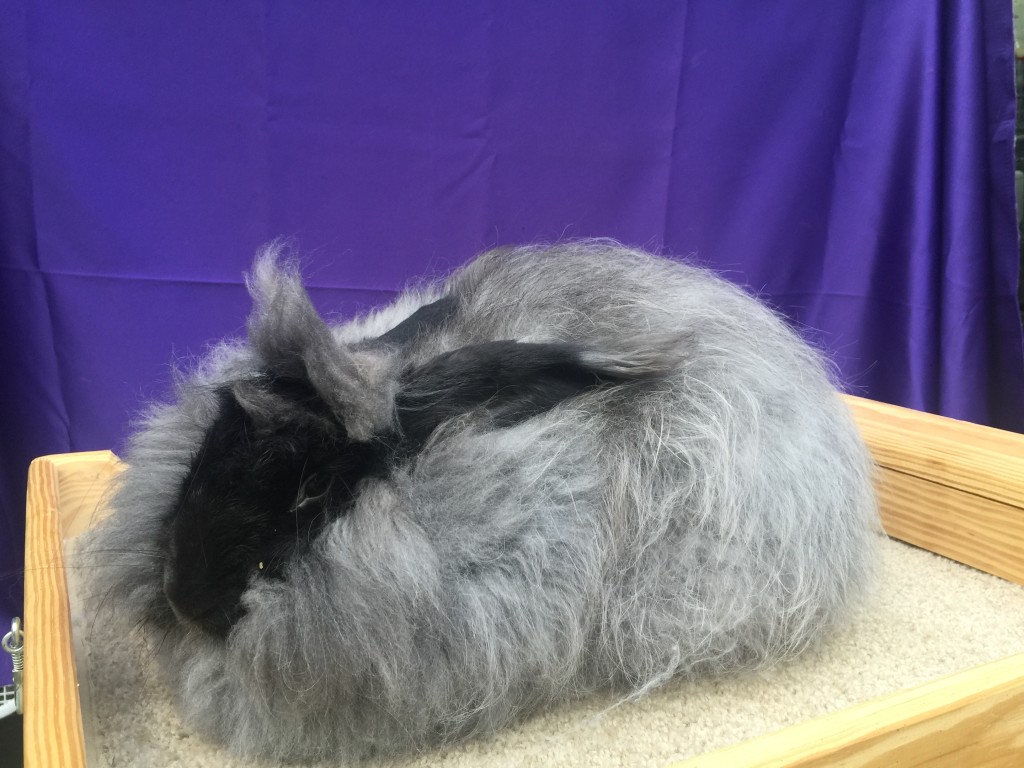 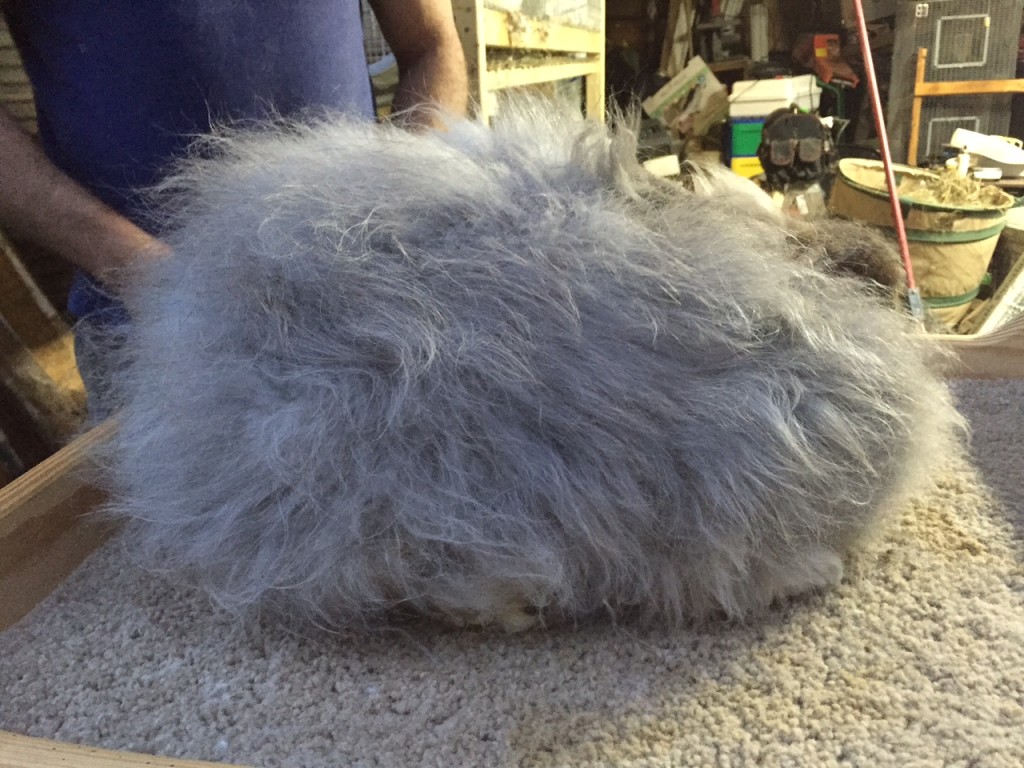 Where is the bunny? Can hardly see beyond all that fiber 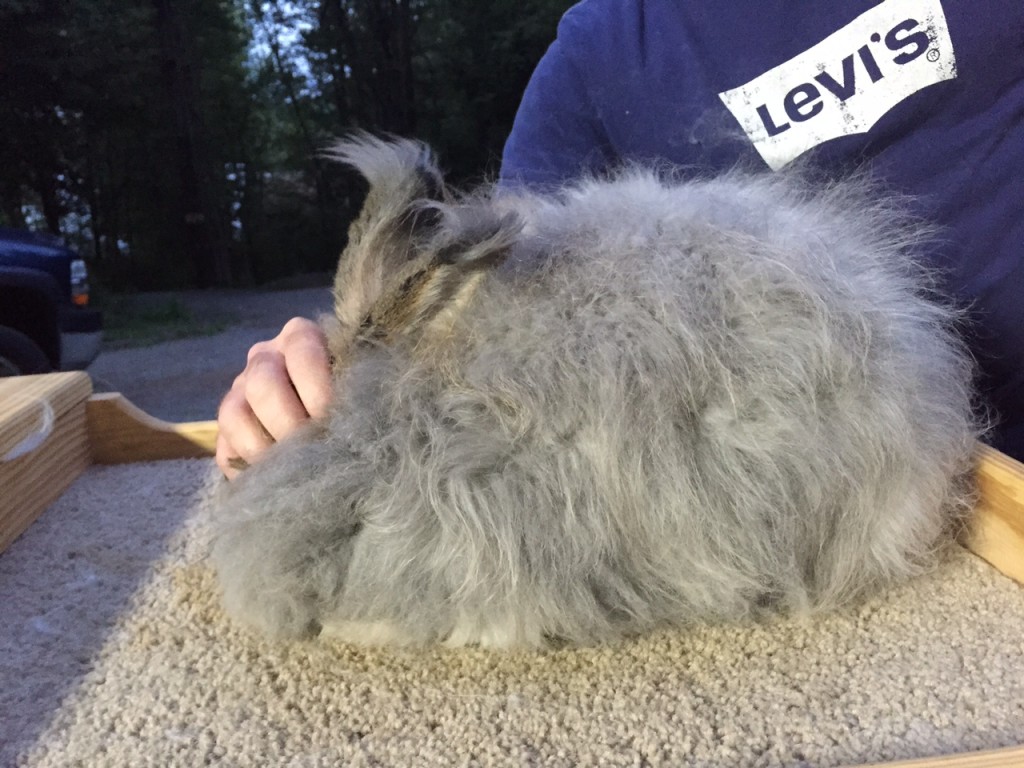 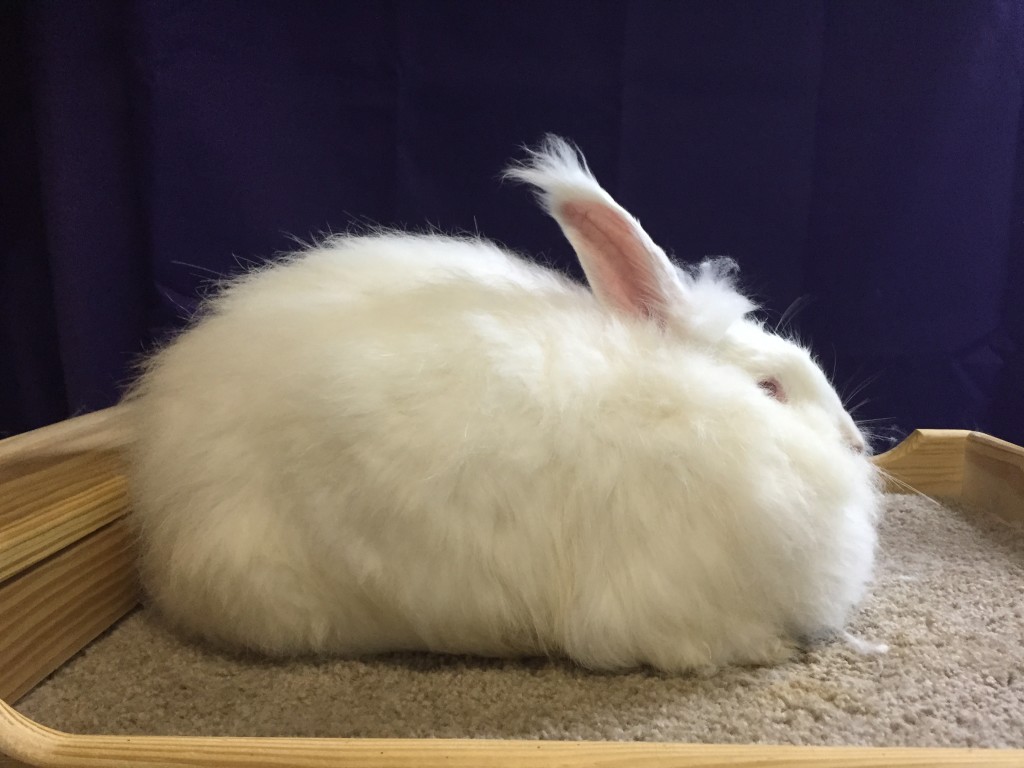 The Giant Angora is the largest of the ARBA accepted Angora breeds, having been created by Louise Walsh, of Taunton, Massachusetts to be an efficient wool-producing rabbit sustained with 16-18% alfalfa based rabbit feed and hay, and living in the standard size all wire cages used for commercial breeds. The ARBA wouldn’t allow German angoras to be shown because their body type was too similar to other breeds, so Louise Walsh made a new breed from German angoras, French lops, and Flemish giants to create a completely different body type. After several years the ARBA accepted it as a breed and it is now showable. Its coat contains three types of wool: soft under wool, awn fluff, and awn hair; the awn type wool exists only on the Giant and German Angora. This breed should have furnishings on the face and ears. Many people confuse German with Giant Angora, but they are not the same. Technically one could show a German angora as a Giant angora since they have German angoras in their pedigrees, however they are unlikely to score well due to the lack of desired body shape.

This is the largest of the four ARBA recognized Angora breeds. The only color the ARBA currently officially recognizes for Giant Angora is ruby-eyed white (REW), or as more commonly referred to as an “albino“, indicating the absence of color pigment in the genetic makeup. The Giant Angora produces more wool than the French, Satin or English Angora. It is easiest to set the rabbit on a standard grooming table, with a “turn table” to do the clipping, or you can pluck the loose fur they are shedding. The Giant Angora Buck in this picture is on a turn table, about to have his summer clipping, (18 oz) You then stay in control of where the rabbit is. Like the German Angora, they require their wool to be harvested every 90 days. When Giants are on a good feeding program, their wool will grow abut 3 cm or 1 inch per month. The coat needs to be monitored after 6 months of growth as it may tend to “die” and easily mat. 12+ ounces of wool is not uncommon per clipping of a good-sized Giant Angora.

The Giant Angora coat contains three fiber types for its texture. The underwool is to be the most dominant over the other two types of hair. It should be medium fine, soft, delicately waved and have a gentle shine. The Awn Fluff has a guard hair tip and is a stronger, wavy wool. The Awn Fluff is found between the Underwool and Awn Hair. The Awn Hair, also known as guard hair, is the third type of fiber. The Awn Hair is a straight, strong hair that protrudes above the wool and must be present and evident.

In judging the Giant Angoras the majority of the points are based on the wool, which includes density, texture, and length. The points for “general type” include the body type, head, ears, eyes, feet, legs, and tail.

Additional information may be found in the ARBA Standard of Perfection

Like many other “giant” breeds of rabbits, the Giant Angora grows slowly. A doe usually takes more than a year to reach full maturity (size and weight). A buck can take up to 1.5 years to fully mature (size and weight). 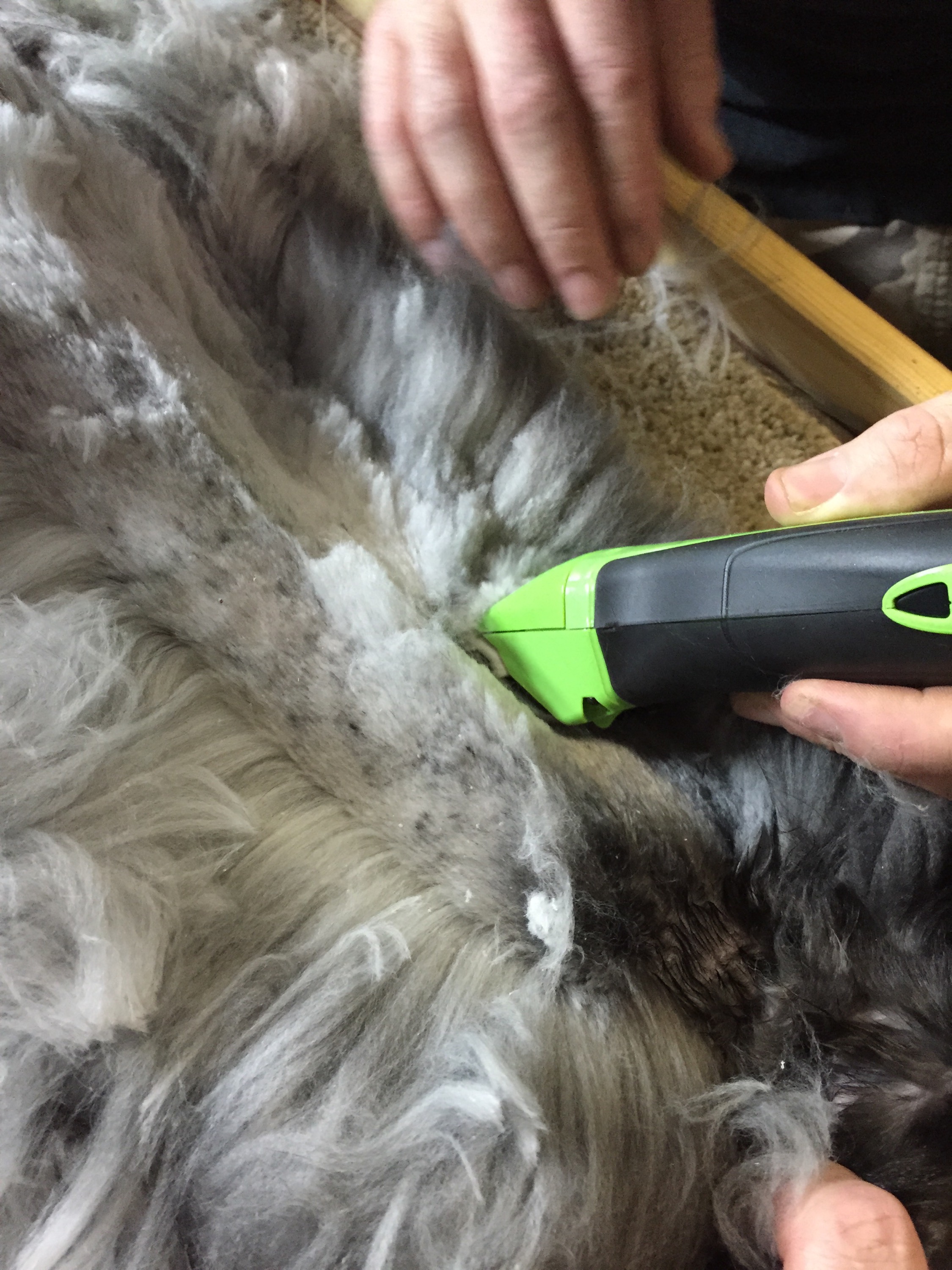 Activities on the Farm